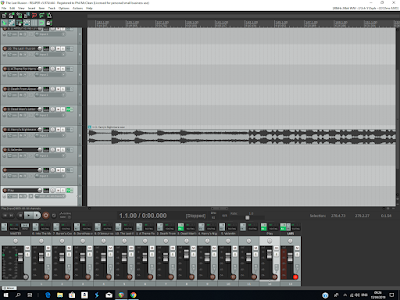 Am busy mastering the final renders of  "The Last Illusion" and am decidedly pleased with the forthcoming results. My original vision of pseudo ethnic with classical sounds has remained true. And there is metal, crushingly heavy at times but those times are rarer than I originally envisioned but as a result those times are immediate and incredibly effective.

When I started to write this piece (All 13 and a half minutes!) I had a sound in my head almost immediately - Jerry Goldsmith meets Danny Elfman sharing a pint with old school Korn. Not that I'm fit to shine the shoes of those mentioned but the core sound is in that ballpark. I even surprised myself with a cool Jazz trio sound at one point. I call it J(Ass) as I am only a pretender in the Jazz genre.

Next up is a bit of a photo shoot, nothing pro - just a bit of fun to accompany the music's eventual upload into cyberspace. For now, maybe I can pique your interest with the leif motif titles and description. Early reviews have been promising and flattering. I trust it's not just lip service!