Growing up, most people would have been aware of their local "haunted house" in the neighbourhood.

As a young child in what was then, a very different Jobstown in Tallaght back in the late 80's - early 90's. There was Wolfy's house. It was the house of a man that went mad, turned into a wolf and killed his family. It was said on nights of the full moon, you could hear him scarpering around the rooftops in search of his next victim.

Of course, as a child - the original story was much more convoluted and scary. Mainly due to my older sister's gift for embellishing upon it.

However it was a story that always stayed with me and recently, it resurfaced. My music has been coming to the fore in various places so why not take it to the next level? Why not create a short movie inspired by the above story, that will engage the viewer and I can add my own sonic touch to it? It's not hard to make a film, with a slight bit of know how and understanding of the various techniques, all learned through trial and error over the years - I'm confident. Not overly so. It's a low to no budget movie which will be heavily dependent on quite a bit of charity and goodwill but if I get my passion across (and guilt several family members) it is entirely possible. Full credit to family and friends, they are always game for my mad creative tangents. The star will be my young nephew, Paul. Who's cheeky, a lunatic and most important for the role -  has a big, huge heart. The premise is a well used one, hopefully with a fresh take: "What if your neighbour was a werewolf and, nobody believed you?" I'm feeling a fun Goonies meets Fright Night (the original) vibe

I have fleshed out the story over the bones of the last year and created a poster along with soundtrack leifmotifs for the various characters. I'm looking forward to filming over the next month or so. Laois is an actual goldmine of beautiful and interesting locations that will be well suited to the story so am genuinely excited about getting this up and running.


HERE'S THE POSTER I CREATED, MAINLY FOR MY AMUSEMENT FEATURING OUR HERO IN A NO NONSENSE POSE,  CREEPILY WATCHED BY THE ANTAGONIST........ 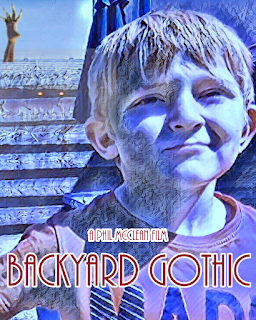