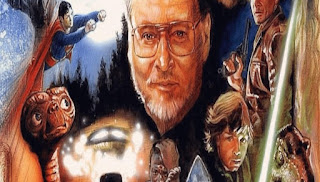 Filming "Backyard Gothic" is a slow and tedious task, between getting people together and working on the right dialogue, but as a labour of love, I'll get there by hook or crook.

I would consider myself a competent composer, who enjoys leitmotifs. Leitmotifs, I suppose are a character theme. As ambient soundtracks take hold - themes hold less weight. It's now more about atmosphere and sound fx. Which I've no qualms with. There are some truly wonderful examples of it out there. But for my little short film, I wanted it to be a throwback to the John Williams, Jerry Goldsmith, Elmer Bernstein sound. You know the 80's / 90's BIG sound with leitmotifs galore?

Now, I am not comparing myself to these guys, I am not anywhere near that level but as a reference, there are none better. I also want to use as little hybrid sound as possible. Keeping the electronic sound from the orchestral. I am employing at points but for a retro sound, they are kept to the bare minimum.

I uploaded a version of "Charlie To The Rescue" a little while back and surprise, surprise.....it was missing something. The entire scene is basically child vs The Big, Bad Wolf and it needed more "Oomph!". I added some trumpet triplets and the ominous bad guy motif at the start, with some marching snares deep, but noticeable, in the mix. It's a piece I'm very proud of. And I can't wait to start editing it into the scene.